The valley in the name of Happy Valley Band is for Silicon Valley. The happy today, April 18, 2020, is nominal, due to widespread Covid induced seclusion. Happy Valley Band, an AI-arbitered experiment, is headlining a live stream that features noises from Erin Demastes and synth flashbacks from Ryan Page, the latter performing as Repairer of Reputations. The live stream phenomenon, like the coronavirus itself, is still novel.

The concert, held by the experimental promoter Indexical, occurs on Twitch, a platform for watching other people play video games. The Twitch website is correspondingly colorful and antic. For those less engaged in gamer culture, it can also be confusing. Like a waiter missing the hint that you have no interest beyond the club’s minimum drink requirement, Twitch often pesters you about ways to level up, mystifyingly so.

Demastes’ opening set is brightly illuminated, and otherwise a stark contrast to the manic framing of Twitch’s interface. On screen, color fields shift slightly and meaningfully. She is patiently engaged in microsound, in closely miking textiles and other materials. Her audio is at first quiet, so much so that latecomers keep entering the Twitch chat room to ask if the sound is even on. It is. (One good thing about Twitch concerts is that musicians and audience can silence crowd chatter with a click.)

As the volume rises, more sounds are heard as she probes and amplifies things seen through a microscope. These are as curiosity-invoking as they are abrasive. An after-show interview sheds additional light. Demastes lists her tools. These include beads, Styrofoam, and corkboard (that “gross brown stuff,” she reminds us), as well as a Slinky, a lobster fork, and a doorstop.

Happy Valley Band go second. Like the audience, the group’s members have assembled, far and wide, from the comfort of private spaces. They appear in the all too familiar virtual-conference grid of torsos. David Kant, the band’s leader, sets a self-mocking tone: “We’re going to be here for the next … too long, destroying your favorite songs.” What Happy Valley do is play music as heard through artificial intelligence. The musicians — including Kant on tenor sax, Mustafa Walker on bass, Alexander Dupuis on guitar, and Pauline Kim on violin, among too many members to list here — play notation produced by software that listens to pop classics and spits out what the algorithms observe. The Happy Valley Band are Kenneth Goldsmith by way of PDQ Bach: cultural plundering in the service of joking forensic dismemberment. They churn through hits like Phil Collins’ “In the Air Tonight” and James Brown’s “It’s a Man’s Man’s Man’s World.” Much as synthesizers have an easier time inferring pitch from woodwinds than from multi-timbral instruments, the barebones nature of Patsy Cline’s “Crazy” yields the least frantic results of the show: the chords are anything but standard, but do leave space for the ear to focus on individual elements. The bombast of Bruce Springsteen’s “Born to Run,” however, yields frenzied mush.

Like Demastes, Page performs work where visuals and sounds are inseparable. Throughout his set, the screen fills with ancient cathode-ray images, snatches of what seems like a VHS tape of a forgotten Roger Corman horror flick. The occasional narration reads like the script to a text adventure (“You open the door. … As you enter, you are sure this is your house”). The eeriest thing, nonetheless, is just how period-perfect are the synth-score cues that Page plays to accompany the footage.

There’s some additional context in a post I made when I first announced the article’s publication (“This is the first freelance concert review I have ever written on the same device on which I witnessed the concert”).

This article I wrote originally appeared in the July 2020 issue (number 437) of The Wire.

Been a few days since the previous Buddha Machine Variation. The camera died, after it had stopped playing nice with audio. And I got a new, smaller synthesizer case (from Pulp Logic, who were super helpful with plotting it out). This is the first time I’ve ever used an expression pedal with my synth, thanks to one of the three tiles in the upper left corner of the box. (“Tiles” being a term for the shorter modules seen top and bottom here, above and below the ER-301 module.) Very simple little patch. Just a proof of concept. The tiny foot (well, hand) pedal is triggering the recording of a microloop (400 or so milliseconds) of the choral audio coming from the Philip Glass 80th-birthday edition of the Buddha Machine. The expression pedal is varying how much we’re hearing the inbound Glass loop, and how much we’re hearing the microloop. If you’re wondering where the Buddha Machine is sending its audio into the synth, there are jacks in the side of the case itself.

For further patch-documentation purposes, here are two shots of the synthesizer: 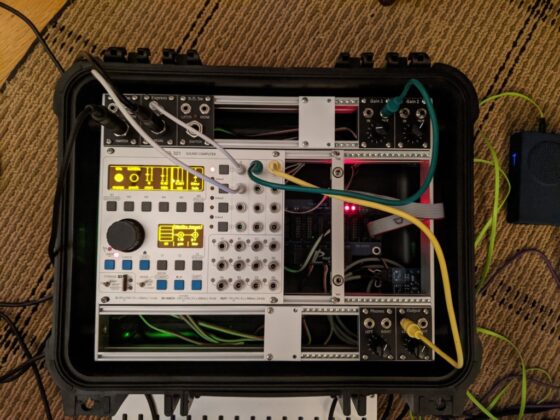 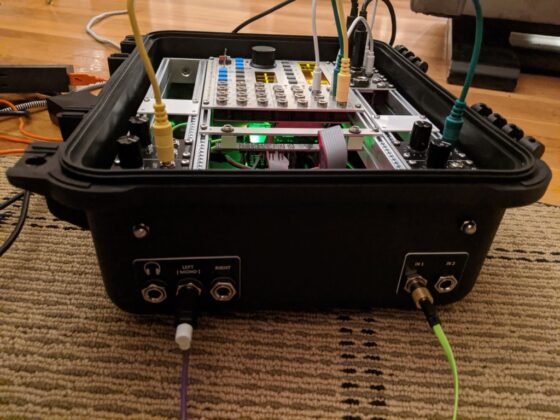 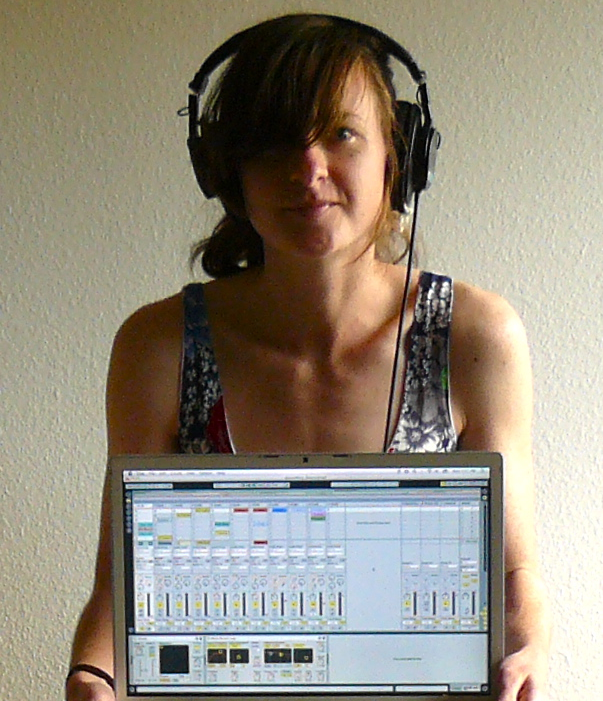 From within an opening mass of cloudy digital fragments comes a nimble if martial beat. It’s adorned, in time, with squiggly computer noise and a humorously sublimated vocal. The track is titled “Y’all” and it’s by Katie Gately, who’s based in Los Angeles and whose work here comes across like synth pop turned inside out. There are words caught in endless echo-repeats, phrases uttered and forgotten, raw syllables left to their own devices. The voice, which is to say the voice’s comprehensibility, slowly decays over the course of “Y’all,” and it ends up sounding like HAL 9000’s little sister crashing hard after a multi-day bender. What makes the track so great is how it seems like pop music even though it’s almost devoid of a proper song structure (there is something akin to a chorus, but it only occurs twice, and the second time it falls apart quickly). Even better is how the vocal line’s disintegration is treated as part of the music’s overall compositional development, how the words — or lack thereof, as it progresses — function as rhythm, melody, instrument, sound.

Track originally posted for free download at soundcloud.com/fionamoocow. The above photo is from Gately’s bio as part of the team behind a video game called The Moonlighters.

The name rawb1 is that of a SoundCloud account that’s a regular on the Stones Throw Beat Battles. The battles are a strong precursor of the Disquiet Junto. Each week a sample is offered up to the members, who then — with a handful of restraints, along the lines of variations on the game of poker — craft an instrumental hip-hop beat out of it. Much of the rawb1 account is a series of these entries, but the most recent track suggests itself as a respite, thanks to its title, “Cigarette Afterwards.” It’s a solid beat, which is to say it is unsolid: there’s a light shift or swagger to its pace, even though its foundation is a repeated sample of a piano, bass, and percussion. The tension, or more to the point the accomplished lack of tension, between affect and process is a key facet of a good beat, There’s also a bit of coital enthusiasm that serves as “Cigarette Afterwards”‘s approximation of a vocal. One of the pleasures of the Beat Battles is listening to instrumental hip-hop continue to become a self-contained force, not music intended for sublimation to a vocalist, but a formed composition unto itself.