The Galapagos performance space in Williamsburg, Brooklyn, last night played host to two hours of installations, video shorts and music performances. I caught the L Line out from Manhattan with a friend. We went for the music (Bit Shifter on software-controlled Game Boys; Jamie Allen, pictured below, on a home-made noise-box), but happily stayed for the videos — several of the best of which had strong sound elements. 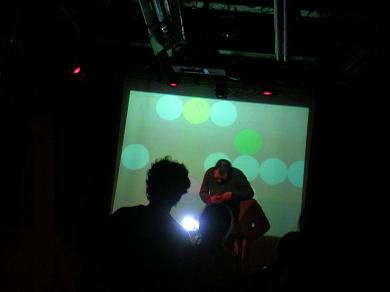 Near the Galapagos front entrance, above a reflecting pool, Charles Beronio‘s large-scale banner project (phrases like “Pretty Vacant” treated with the vinyl lettering generally favored by strip malls) contrasted with Zachary Biberstine‘s “Flag”video, which looped throughout the evening; in the video, a man works at an American flag with a pair of scissors while drinking water. The event was presented by vertexList, an artist-run space nearby in Brooklyn. And if the collected works themselves unfolded beneath a banner, it was the broadly defined one of “new media art.”

Last night, “new media art” meant anything from Joe McKay‘s video “Robots NoFollow,” in which he interviews a coy automaton at the Sony store; to a stunningly beautiful one-minute piece by Aron Namenwirth, who alternated between photographs and colorfully pixelated, bitmap-like renditions thereof; to plays on Hollywood, like Kara Hearn reenacting scenes from ET and Gladiator, performing each role herself. All the screened material (13 shorts total, divided into two sets) benefited from the increasing availability of low-cost digital tools, whether the resulting art embraced the tools as a constrained form of artistic process, commented on the technological mediation of everyday life, or simply utitilized the equipment to create brief narrative or abstract films.

Among the highlights was a piece by Marcin Ramocki, who treated high-contrast images of faces as 21st-century piano rolls. Lee Arnold‘s “S-Bahn” set side-scrolling footage of what appeared to be Berlin shot from a moving train against a dubby, dank brand of electronica.

Between the two sets of video shorts, Bit Shifter was introduced by the night’s MC as “the Segovia of the Game Boy,” though he sounded a bit more like the Monolake of the Game Boy. The software he employs, Nanoloop and Little Sound DJ, gives technologically adept musicians access to the same controllers that rendered blippy background music for early portable video games. In the hands of Bit Shifter (born Joshua Davis) this means upbeat minimal techno that benefits from a live PA system. I’d heard his music previously as MP3s, streaming audio and on CD (it’s also featured in the documentary film 8 Bit, directed by Ramocki), but none of that compared with the fuzzed-out quality of the sound in live performance. (In an example of commerce immitating art, the video game company Eidos recently released beatmaking software for the Sony PlayStation Portable, called Traxxpad; traxxpad.com.)

After the second set of videos, Jamie Allen took the stage and announced, “I’m going to attempt to play some circuitry.” Like Bit Shifter, he works deep in the technology. If Bit Shifter does so by edging past the intended surface interface of a common household toy, Allen lays the circuitry bare. He accomplished this last night on a device of his own making, anchored in a wine crate and called circuitMusic. It’s pictured here: 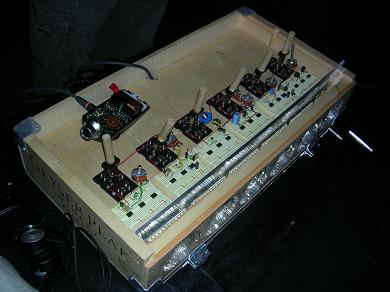 He played squelchy, funky noise to start, resembling the Beastie Boys circa Check Your Head, much of it resulting from highly processed warpings of sounds he mouthed into something he’d purchased from RadioShack, ripped the casing off of, and plugged into his equipment.

Just as the audience began nodding along, Allen dove even deeper into the sounds, working single tones like the sonic equivalent of clay, shaping drones from raw static, feedback and electricity. The design of his circuitMusic is ingenious, especially from a live performance standpoint. It consists of six triggers, each of which simultaneously turns on or off a headlight at the front of the box. It’s fascinating how such a simple addition can give audience members something on which to focus their imaginations and curiosity. Behind Allen ran video footage of colorful circles that suggested what Josef Albers might be doing today, were he in his late 20s and living in Brooklyn.

Separate from the night’s event, but still well within its realm, was Katja Loher‘s installation, assembled in the Galapagos back room. A performance video was projected on a massive globe, to a mix of sung material and field recordings; the images featured a bird-person hybrid amid flocks of pigeons, and the video, mapped as it was on a sphere, gave new meaning to the phrase bird’s eye view.