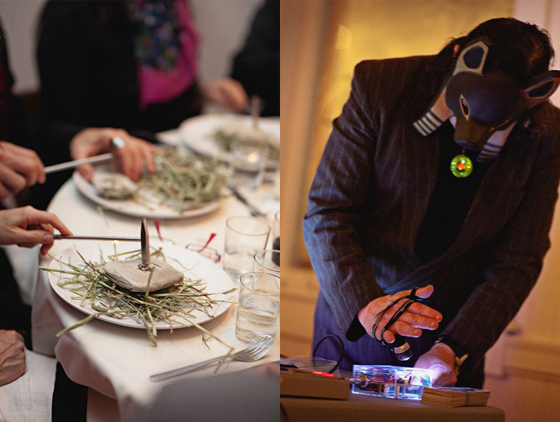 The Spanish-born painter Remedios Varo (1908-1963) depicted surreal visions in which the mythological and the quotidian intertwined in enchanting ways. She created fascinating documentation of her explorations of the terrestrial and the otherworldly, a place where sight and sound, scent and taste, sense and fantasy collaborated and contrasted toward a tantalizingly ephemeral end.

This month I had the pleasure of concluding work on a project with Julio César Morales and Max La RiviÃ¨re-Hedrick that celebrated various facets of Varos’ work and life. Titled La Alquimia de los SueÃ±os (which translates as The Alchemy of Dreams), it was commissioned by the gallery Frey Norris in San Francisco to coincide with an extraordinary Varo exhibit running there through February 25. The project took the form of a dinner, a kind of meal-as-art, held at Engine 43 in San Francisco’s Excelsior neighborhood. There were six courses, each associated with a different magical spell and drawing on the surrealist recipes that Varo had created with her close friend, Leonora Carrington. There’s a January 29 story about the event at nytimes.com (“Break Brick, Break Bread, Break the Mold”).

I. The Sound of Dreams

As for my role, among other things I had the pleasure of interviewing Mexico-born sound artist and musician Guillermo Galindo, who lives in San Francisco, about his participation in the project. As seen up top, in a pair of photos by Andria Lo, he performed at the dinner — not only his own mix of sounds, but also deep shuddering bass lines that drew from Varo’s interest in resonance and vibration. What follows is an excerpt of the full interview, “The Sound of Dreams,” which can be read at engine43.org:

Weidenbaum: Regarding the relationship between Tarot and the collective unconscious, can you talk a bit about specifically the role of sound in dreams?

Galindo: I have found that for most people it is difficult to remember the sound, or sounds, of their dreams. Most people, including me, have an easier time remembering music: music that accompanies the dream, music that is played by someone or, in my case, composition ideas that appear by themselves or performed by myself or someone else. As in real life, dream components have sounds: an explosion, someone walking in high heels, the sound of the rain etc. Having said this, I do think that sounds have their own significance in dreams — a significance not necessarily attached to the visual or narrative elements of a specific dream. In other words, I believe that sounds in dreams do have their own specific symbology.

Weidenbaum: Are there parallels between food and sound you’d like to discuss?

Galindo: I had a Chinese music student who, in order to reconnect to her homeland memories, recorded the sound of herself cooking of Chinese dishes, which she would cook one day each month. Then she would present random photographs of the dishes with the audio of the cooking sounds. Different foods have different textures of sound when one cooks them. This provides information about their physical nature and about the chemical reaction that they have when mixed over the fire with other elements. I think that the purest and most enjoyable “food”sound is the sound of water. I think that the sound of the water falling into a glass is a vital element when enjoying a good drink of water, not to mention the “clink”of the wine glasses, the sound of silverware, or the sound of clay, wooden, or ceramic plates and bowls. And this is a screenshot that Galindo provided to me of the software setup he utilized when playing live, in addition to a pair of Kaoss Pads and at least four iPods. (It is of higher quality than the casual camera shot I posted on Twitter the night of the event.) 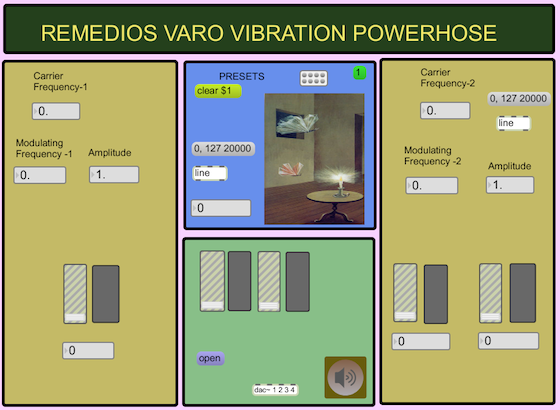 Here, from a post-event summary, is a list of the sounds he developed for each of the courses:

In addition, I served as managing editor on the project, working with the various participants on their written contributions. And I wrote a short story, “Sitting for a Dream,” that is an imaginary scenario inspired by the fact that Mexico City cardiologist Dr. Ignacio ChÃ¡vez commissioned what yielded the 1957 Varo portrait “Retrato del doctor Ignacio ChÃ¡vez.”This is an excerpt from the story:

She took his hand in hers and silently led him through several chambers, each its own little world. One was dark and painted like a jungle. Another was covered, walls and ceiling, in billowing cotton tarps that filtered the daylight. He entered the final chamber by himself. Varo stood on the far side, directly opposite the doorway through which he had just walked. She, too, wore a lab coat, her hair pulled back. The room was almost empty. In the center there was a medium-size wooden frame suspended from the ceiling by pulleys. On either side facing the frame was a single chair. He walked toward the frame, and as he approached, so did Varo. He realized she was mimicking him, but not in a rude way. If anything, it was flattering to be the subject of such attention. He walked toward the closer of the two chairs. She approached the other, copying his gait, adjusting her posture to match his.

When they reached their chairs, they both sat down, looking at each other through the frame, as if at a painting. She gave him a little smile, which he acknowledged by removing his hat. In turn, she pulled from her coat pocket a deck of cards. She selected one card, seemingly at random, and turned it toward him. It showed an old sage with a stick, and below it, in English, was written “The Hermit.”She then pulled another card, this one in Spanish. It read “El Corazon.”It was his turn to smile. He recognized it from the loterÃ­a. The next card was “La Pera,”and he recalled the tree from the ill-fated mural she had proposed. She saw the recognition in his face, and her shoulders relaxed. Then his shoulders relaxed. Somehow, he found himself now imitating her, unintentionally but naturally. Varo reached under her chair and lifted a small goblet. Taking the hint, Dr. Chavez did the same. Again, he found himself mimicking her — how simply she had cast her spell. This is the painting that inspired the story, which is readable in full at engine43.org: 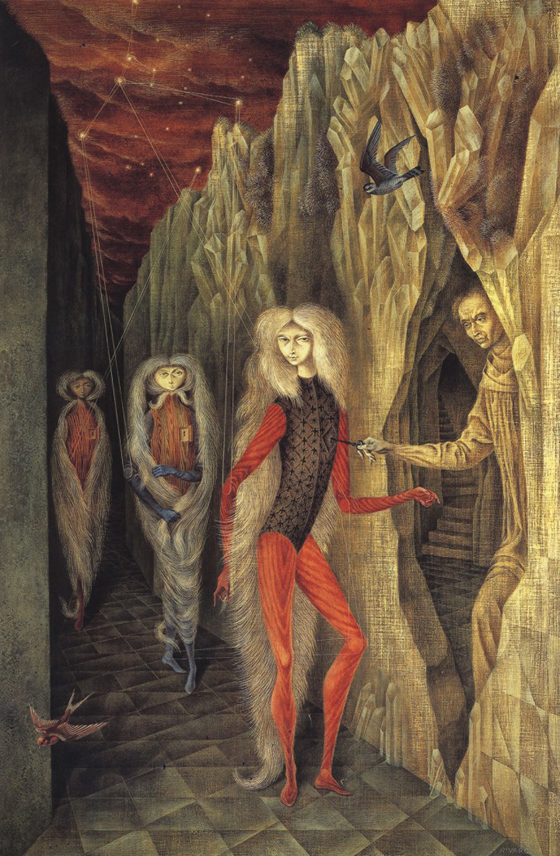 One especially fascinating element of the event was smell. Each course was accompanied by a scent developed by Mirjana Blankenship (of captainblankenship.com), and these scents built one upon the previous as the evening proceeded. The terms for these elements of a collective scent, I learned from Blankenship, are musical: they are “notes.” The deepest is the “base” note, and then there are “heart” and “top” notes above, and they all “decay” over time, much as a struck chord might. The explanation reminded me of an essay by Brian Eno from the magazine Details back in 1992 (“Scents and Sensibility”), in which he described the parallels and intersections between his experiments in smell and sound. Blankenship’s scents (presented in the elegant bottles shown below) were not to be experienced in their own olfactory anechoic chamber. Quite the contrary, they were selected and constructed to mix with the scents inherent in the meal, including the rich smoke that emanated from the hearth in which meat was roasted, and the burnt sugar that resulted from pistachio pralines made on site just moments before they were served (see the very bottom of this post). By intending to mingle rather than command attention, Blankenship’s scents were like the famed “furniture music” of Erik Satie that is understood as a strong precursor of ambient music — sounds that Galindo included in his performance. 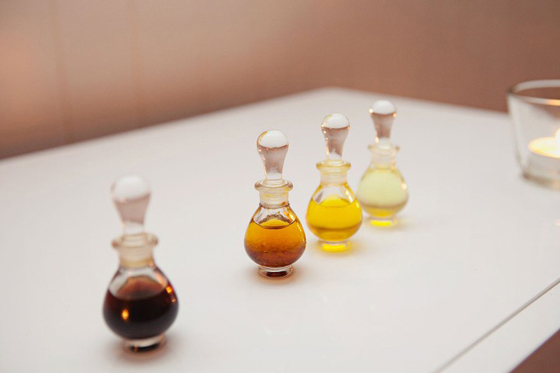 More on the exhibit and the gallery at freynorris.com. There’s a wide range of coverage of the La Alquimia de los SueÃ±os event at engine43.org.

I previously participated in A Sors, a project the duo developed, with Norma Listman, for the Warhol Initiative. 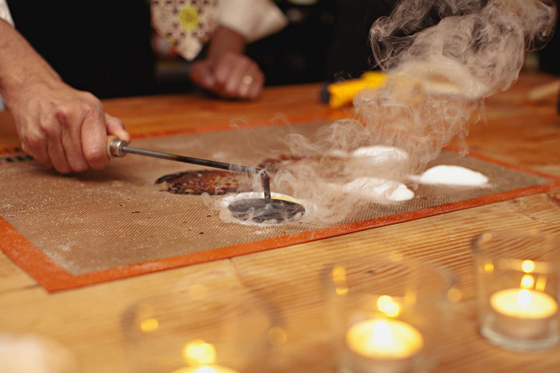 (Photos by Andria Lo of andrialo.com.)