Â¶ Buchla Doc: Director Connie Field has launched a Kickstarter for a documentary on Don Buchla, a legendary figure in the development of the music synthesizer. Her colleague on the prospective documentary is editor Gregory Scharpen, who records as Thomas Carnacki.

More on the project at kickstarter.com and clarityfilms.org. They’re looking for an initial $25,000. Goal end date is Monday, April 15, at 1:15pm EDT.

Â¶ Designing Sound: Over at domusweb.it, Maria Cristina Didero talks with Domitilla Dardi, who along with Elisabetta Pisu curated “Disegnare Oggetti Sonori,” which translates “Designing Sound Objects,” an exhibit presented by Fondazione Musica per Roma and the IMF Foundation about the intersection of sound and design. Parallel to it was a Anna Cestelli Guidi”“curated show by Zimoun.

Q: Can sound also be design? If so, how?

A: Sound is designed by sound designers but is also a phenomenon that guides many designers’ thinking. In the exhibition we have set up three approaches to sound design: that of Listening, through means conceived to transmit sound in absolute purity; Music, with instruments chosen for their experimentation with new ways of playing based on ergonomics, gestures and entertainment; and Sound Objects, everyday objects that associate a practical-utilitarian function, like an alert, background, or inspiration from the world of music.

This, part of the exhibit, is Leslie Borg* and **Anita Silva’s sensorial headphones, called “_scape” (2012):

Â¶ Birds of War: One of the tensions peculiar to reading about animal science is the underlying sense that the research, based in the field and enacted by individuals who generally appear to have a deep affection for their subject, is in fact at some level, perhaps discreet or perhaps quite obviously, funded by the military — that the study of life is, in fact, the study of death. This is, at a psychic level, something out of a story by Richard Powers (think of the corporate operations of Gain, or the computer science of Plowing the Dark). This sense permeates “The Owl Comes into Its Own”, a story by Natalie Angier in Monday’s edition of the New York Times. There’s much in the piece about the natural engineering of the owl’s wings, and what aeronautics can learn from them: “Researchers have traced that silent flight to several features. The bulk of the wing is broad and curved — the ideal shape for slow gliding — and is abundantly veined with velvety down plumage to help absorb sound.” 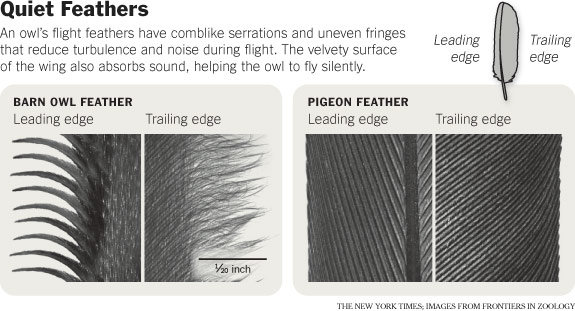 There’s also a fascinating moment when Angier plays an owl call from her phone and the owls respond: “I played the call again, the male grew bored, and I was about to put the phone away when suddenly the female — the larger of the two owls, as female birds of prey often are — pitched her body forward on her perch, lifted up her heavy, magnificent wings and belted out a full-throated retort to my recorded call.”

Â¶ In Brief: The entire score to Stoker, from director Park Chan-wook (Oldboy, Thirst), is streaming for free at blackbookmag.com. Get the full track listing at soundtracksonvinyl.com. The score is by the great Clint Mansell, best known for his work with Darren Aronofsky. The stream includes a new piano duet by Philip Glass, among a few other non-Mansell pieces. Â¶ This weekend there are two streaming Autechre events in advance of the release, next week, of the duo’s Exai album. More info at mixlr.com. Â¶ Just noticed that the productivity website 43folders.com has an Oblique Strategy in its footer. The current one reads “Honor thy error as a hidden intention” but they may rotate. Brian Eno as the new Stephen R. Covey. Â¶ The 60th Disquiet Junto project closed this past Monday at 11:59pm, and we ended up just shy of 55 tracks; each features a different member of the Junto talking about his or her work. This Junto project was part of a larger SoundCloud audiobio project, more on which at blog.soundcloud.com. If you participate at SoundCloud, I strongly encourage you to join in the project. Â¶ Impressively thorough overview of the score to Portal 2, the video game, at reddit.com. Also includes this solid response by the author to a snide commenter: “I understand, and am flattered when others choose to read this, I understand when others don’t. What I don’t understand is others taking time to tell me that they didn’t.” (Via twitter.com/dpnem.) Â¶ Carl Stone links to Phnom Penh field recording he employs in his work: soundcloud.com/larbneur. File under “Cambodian Aerobics.” Â¶ Via the increasingly excellent io9.com, “Yes, you can actually hear microwave pulses.”