Monorail, the solo musician not the retro-futuristic vision of transportation utopia, has a running series of live synthesizer jams on his YouTube channel. The styles and tools vary from jam to jam, though there is usually a modular synth at the core. Some might argue that the contemporary rise of the modular synth is itself a form of retro-futurism. If you scroll through his video archive you can chart, in the thumbnail images, the steady progression of his studio: 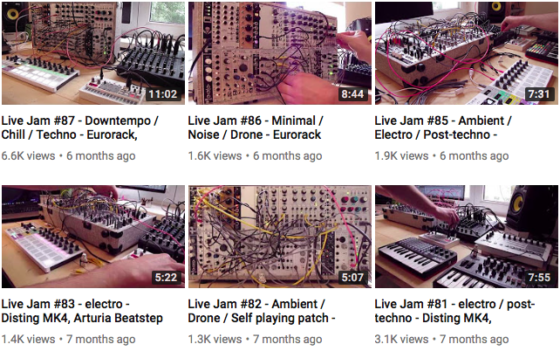 Sometimes a fellow musician, like a drummer, joins in, but generally speaking these are solo outings. The most recent, as of this writing, is jam number 114, a textural ambient piece, starting off with piercing tones and found snatches of dialog, and then proceeding into something denser and more amorphous, with segments of smashed white noise and soft, low-lying drones. Admirably, the video has the full synthesizer in clear view, so you can patch along at home following his example if you elect to. Occasionally Monorail’s arm enters the picture to adjust an oscillator or tweak some other setting, though for much of the piece the music is left to its own looping, slowly evolving devices. Present in the video is a little Lego figure of a Star Wars stormtrooper who appears — like Where’s Waldo from a galaxy far, far away — in many if not all of Monorail’s recorded jams.

This is the latest video I’ve added to my YouTube playlist of recommended live performances of ambient music. Video originally posted at Monorail’s YouTube channel. Monorail is Rijnder Kamerbeek, based in Berlin, Germany.