The batteries were dying on one of the Buddha Machines, so I recharged them. But only a bit. Just enough to let them last for this recording. The green one on the left is the one giving out the dying-whale sounds, the dying Buddha. The blue one is fully charged. Both are sending loops of drones into the synthesizer.

There are only two channels into the mixer at the end of the line. One of them is straightforward, the second of the two. It is passing a tiny bit of sampled audio that changes every so often. That audio being sampled and looped is a snatch of one band of the blue Buddha Machine; that’s after it’s been extracted from the broader audio spectrum. The playing of the loop is being triggered by a square wave from the same module that is providing the overall clock for the rhythm heard. The moment at which the sample occurs, however, is triggered due to another square wave, which is moving at a slower pace. That’s channel two.

Channel one is built around the Muxlicer from the manufacturer Befaco. This is the first Buddha Machine Variation to include the Muxlicer. (All the other modules have been used in previous variations, so I’m not mentioning them in detail here.) The Muxlicer does many things. What it’s doing here is as follows. It has one main input, which received the direct line of the “dying Buddha,” the green one. There are eight “outs” from the Muxclicer. The dying Buddha is the default audio for each, its volume altering based on those eight faders. However, four of the tracks have alternate inputs, which override the dying Buddha. Of these alternate inputs, the first is a copy of the blue Buddha. The third, fifth, and sixth are all bands extracted from the blue Buddha. And on top of all that, the sequence of which of the eight outs is playing at any given time changes continuously, because they’re being randomly assigned by a sine wave that’s not sync’d to anything else. Sometimes the same out even plays twice in a row. 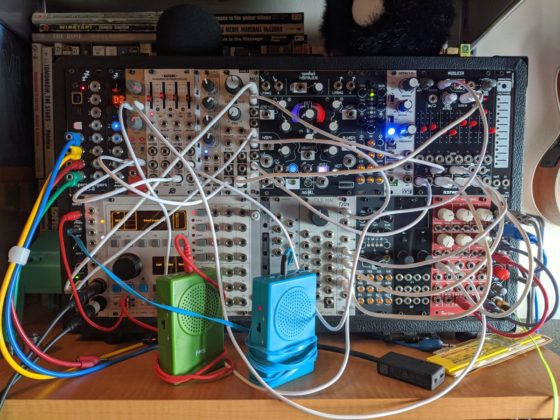