Every screenshot tells a story don't it

Snapshot of my email. An occasional reminder that if you’re wondering why I haven’t replied to your music PR it’s because of the sheer amount of music PR. As always: 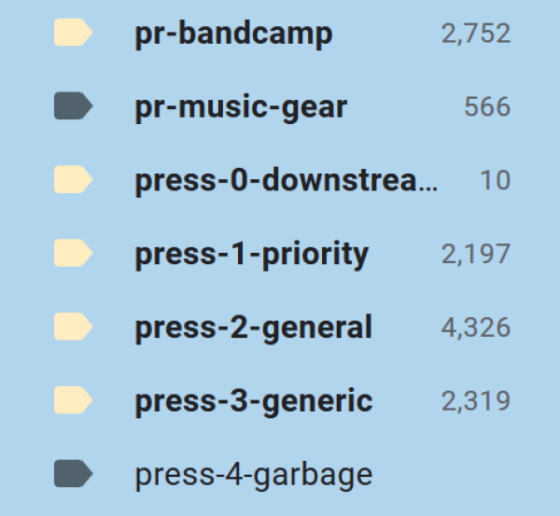 Advice When Sharing Your Music Via Email

Or: Don't be a cockroach

Music PR is broken. The awesome ease of email has combined with the awesome ease of self-publishing audio to produce a far-from-awesome spampocalypse of valueless promotional information. These emails flood the inboxes of recipients and occlude the occasional actually useful and valuable email. Below is some advice when sharing your music for promotional purposes via email, some specifics about sending music to this website (disquiet.com), and a somewhat vile but not valueless metaphor:

Part 3: When Submitting Music to Disquiet.com

When I’ve received way too many emails from a human-seeming email account (not from what’s clearly an automated service aiming for maximizing recipients), I sometimes send back a reply. I have a few variations in a file titled “cut-and-paste.txt” and they get tweaked as time passes. Here’s the one I most frequently send out:

For context: I focus on ambient music, experimental electronic music, contemporary classical, instrumental hip-hop, sound art, and other vaguely related things, related to the extent that the use of technology feels exploratory, intentional — and I must admit I write about virtually nothing with an intelligible vocal.

I should also mention: I get hundreds of inbound emails about music every weekday, and so I rarely respond. I do listen constantly, and when I find something I want to write about, I write about it. I’m a horrible correspondent.

I’ll put this bit at the end, because it’s gross, and yet informative. When I lived in Brooklyn, before moving to California, home was a nice building that, despite being nice, was popular with the cockroach crowd. There was one bathroom in the apartment I shared with some friends, and it was through the kitchen. If you needed to go to the bathroom in the middle of the night, you had to walk through the kitchen. When you turned the light on, the floor of the kitchen would seem to shudder, and then what was in fact a lot of cockroaches would flee. Which is to say, getting to the email I want to read means, on a daily basis, getting through the cockroach equivalent of email. Don’t be a cockroach.

This Week (off) in Sound

There was no This Week in Sound email newsletter (tinyletter.com/disquiet) this week. The last class session of the 15-week semester of Sounds of Brands (Quarantine Remix feat. Zoom), the course I teach once a year, occurred today. These two statements are related.

Getting those patch notes into a virtual binder

There’s a new category on Disquiet.com, in addition to Field Notes, and Downstream, and so forth. It’s Studio Journal, and it’s a place to store away notes (and video, and audio) as I explore music-making. Previously there was a tag called studio journal, but in light of the increased activity I’ve been pursuing with my synthesizer, I figured it’s time to give this material its own section on the website.

Listening and living in place

It isn’t just that I’m not going out much at all. It’s how optimized my activities were, previously, for being out and about, something I was aware of but hadn’t thought about much until now, because now is now different enough from the past that the differences of the past have begun to come into focus.

Is that what we’re calling what amounts to just a few months ago? “The past”? I was calling it “The New Weirdness,” and then I shifted to “Slow Chaos.” But those felt too colorful, almost like celebrations, and there’s nothing to celebrate. Giving a colorful name to what’s going on feels like printing the photo of a serial killer. Not to lend agency to a phenomena, but a cool name feels like what it wants. Things have changed, and we put markers where changes occur so as to map the change. Markers, however, needn’t be celebratory. They can just be sticks in the road.

I’ve worked for myself for a decade, as of this coming July. That already meant working from home, at home, a lot. It also meant a significant amount of variability. I worked wherever I wanted (or needed) to be: at a cafe, at a museum, in a park, at someone else’s office, and frequently simply en route. “En route” isn’t merely a motion toward somewhere, but another kind of somewhere. I get a lot (excuse me: got a lot) done in public buses (my preferred and most frequent mode), in the occasional car (driving or being driven), planes (remember them?), and while walking. I am good (was good?) at related calculations: “I could drive there in X hours. If I take the train, it’ll be Xx2 hours, but I’ll get Y more done.” Also: “I have Y number of transit hours, so I’ll store up the documents I need to read until then.” Those particular skills haven’t found much utility in our unfortunate new present.

There were numerous resulting circumstances resulting from the variability and mobility I was accustomed to, most of which have evaporated: Certain types of music in certain travel conditions. Audiobooks and occasional phone calls on a drive I took once a week most weeks. A little MIDI device for use with my laptop as a productive distraction. A tidy backpack, the contents of which were adjusted as the years passed, that now sits in a closet, wondering what it did wrong. The three little cases for cables, pens, and such, now stacked on my desk, their contents dispersed. The MIDI device is available for when I want to make the long hike from the office … to the living room.

I’m used not just to walking, but to having a narrative in my ear as I go, lending a bit of fictional associative meaning to everyday instances, much as a movie soundtrack might. I’m used to certain albums that I only feel comfortable playing “that loud” in a car. I’m used to favorite drone albums merging with and blocking out the noises of public transportation.

None of that exists now. New habits are forming, some of which might even be good habits, but it’ll be some time before I can put a marker down and look back and understand them.