● On the Making of Brian Eno/Peter Chilvers iPhone/Touch Apps Bloom & Trope (usoproject.blogspot.com): Interview with Peter Chilvers on his development, with Brian Eno, of the iPhone apps Trope and Bloom, and the app Air: “It was something of a two way process,” he says of the development process. “I came up with the effect of circles expanding and disappearing as part of a technology experiment — Brian saw it and stopped me making it more complex! Much of the iPhone development has worked that way — one of us would suggest something and the other would filter it, and this process repeats until we end up with something neither of us imagined.” Story by Matteo Milani. More information at generativemusic.com, according to which a revised Bloom (version 2.0) will be released in early October: “New features include a sleep timer, stereo panning, two additional sounds, three new moods, and two new operation modes. The update will be free to anyone who has already purchased Bloom.”

● The Chimes of New York; and Their Ringers (nytimes.com): “Simple rope pulling it ain’t,” goes coverage of the North American Guild of Change Ringers recent convergence in Manhattan. “Change ringing is a surprisingly difficult and subtle art that involves a series of coordinated hand movements and a sensitive touch. Ringers time their strokes partly by listening, partly by watching the movement of the ropes around them. A sense of timing is essential because of the one-second gap between the pull of the rope and the sound of the bell. The ‘music’ consists of cascades of bell strikes, called rows or pulls.” Why the article’s author, Daniel J. Wakin, or his editor saw it necessary to put quotation marks around the word “music” is unclear, but the enthusiasm of the bell-ringers interviewed in the article is infectious — you come to imagine a religion in which the ringing of bells isn’t ceremonial, but the ceremony itself.

● Kind of Bloop Update; Participant Critiques Time Magazine Coverage (ocremix.org): Musician Sam Ascher-Weiss was quoted in Time 's coverage of the Kind of Bloop compilation, an album that rendered Miles Davis's classic Kind of Blue, on its 50th anniversary, as "chiptune" music — that is, as if it had been programmed for ancient arcade video games. Ascher-Weiss, whose music moniker is Shnabubula, feels that he was quoted out of context about the limitations and potential of this sort of music-making. Original Time piece at time.com. Kind of Bloop available at kindofbloop.com.

● Book Review: Sara Maitland on Silence (nytimes.com): From Dominique Browning‘s review of the new non-fiction book by Sara Maitland, A Book of Silence: “The first kind of silence requires an emptying out of the self in order to be receptive to God; the other fortifies the self in order to be inventively godlike. ‘Silence has no narrative,’ she concludes. ‘Silence intensifies sensation, but blurs the sense of time.'”

● Video-game Website Joystiq Interviews Nine Inch Nails‘s Trent Reznor (joystiq.com): Says Reznor: "Rob [Sheridan, NIN Creative Director] and I are working on a project together that's moving forward and focuses on the creation of content from a developer's perspective. Would I do music for an everyday game? Meh. I'm not thrilled about the idea, but if someone cool came to me and had this great game, then I'd consider it." The interviewer posted quotes that didn't make the Joystiq cut at superdunner.blogspot.com. 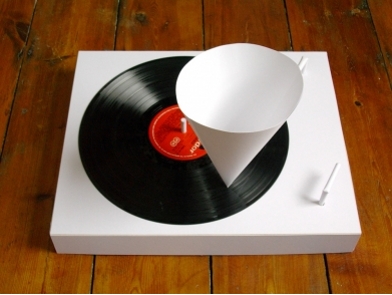 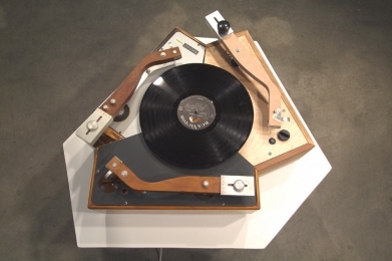 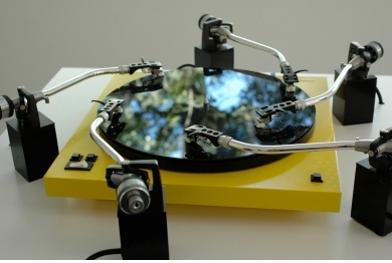 ● Tauba Auerbach‘s Organ as Art (nytimes.com): It “requires two players, each pushing foot pedals to pump bellows for the other. Every afternoon at 5 Ms. Auerbach and Cameron Mesirow of the band Glasser — hence the name of the instrument, the Auerglass — perform a transporting, specially composed duet.” Photo below by Adam Reich for the New York Times: 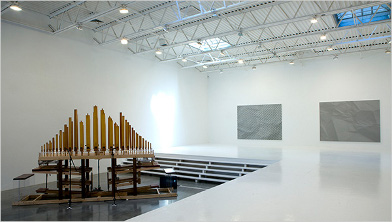 ● On Rock and Joysticks, the Beatles and Nirvana (nytimes.com): The online version of the paper’s lengthy piece about the making of Rock Band – The Beatles, “While My Guitar Gently Beeps,” lacks the intention of the title the article was given when it appeared, originally, as the cover story of the August 16 issue of the newspaper’s Sunday magazine: “The Music Will Matter to You Because You Are Pretending to Make It.” Story by Daniel Radosh. A few week’s later, the paper’s video-game critic, Seth Schiesel, brought some sanity to the hysteria that has followed the appearance of Kurt Cobain, of the band Nirvana, in the game Guitar Hero 5: “Assuming that Activision got [Courtney] Love to sign the proper contracts, it appears that the main potential legal issue (if Ms. Love actually fulfills her threat to sue) is whether having a digital Cobain re-enact songs by other artists in some way damages his image. I am as big a Deadhead as my generation was able to produce (Jerry Garcia died when I was 22, and I had already seen about 90 Grateful Dead concerts and a dozen Jerry Garcia Band shows), so I know what it’s like to be a fan. Hypothetically, would it be weird to see a digital Garcia playing a Jimmy Eat World song? Of course, but after about 15 seconds of shock, I’d find it totally hilarious.”

● Help the Duo of He Can Jog & Always Tokyo Fund Their Planned November 2009 Tour (kickstarter.com): As of this writing, they're about 20% of the way there. Funders get great benefits, like downloads of rehearsals sessions, a promotional 7", and more.

● The Rare Music Story to Quote DJ Mark Farina and Dream Theater — on the iPod Touch as Instrument (sfgate.com)

● While We Wait for the Gristleism Box, an Interview with Genesis P-Orridge About Using Plastic Surgery to Look Like His Late Wife (nymag.com)