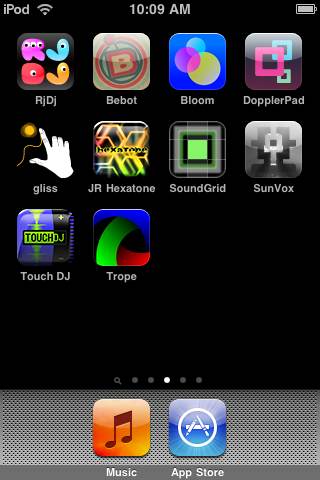 This is a new category for Disquiet.com, and likely a short-lived one. Not because the iPod (or, for that matter, the iPhone or iPod Touch, the latter of which is currently my primary MP3 player) is going away any time soon, but because the landscape is likely to get rangier in the very near future — as the Android, Blackberry, Windows Mobile, Palm OS, and various Nokia operating systems come into their own, or at least struggle to. In the meanwhile, the iPhone/Touch has by far the best marketplace for music/sound-based applications, and to play with the best such apps on the iPod is to only get a sense of, a glimpse of, what these tools will evolve into in the years to come — especially if all these rumors of an Apple tablet result in something real. (I’ve spent a lot of time playing with music software such as Ableton Live on my small Fujitsu tablet PC running Microsoft Windows 7, and let me tell you it’s a great experience — you entirely forget you have a laptop in your hands, and the screen interface simply “becomes” the device.)

As for this list below, with one exception I left out apps that don’t make innovative or extensive use of the touch interface (or other aspects of the iPod as a gadget), and (again, with the same exception) I left out apps that are, in truth, just ports of software that’s existed on other platforms previously (hence the paucity of beatmakers and synths below).

In the case of all of the entries below that work on pre-existing audio source material (most notably Touch DJ), they would all be significantly improved if Apple’s iPod family of devices allowed for (1) easier drag-and-drop adding of music to the gadgets and (2) easy access by third-party software developers to the music held in the iTunes library.

Here they are in roughly alphabetical order:

1. RjDj (version 0.9.4: apple.com, appspot.com): You’ll note that RjDj is out of alphabetic order with the rest of the entries here. That’s because RjDj is far and away the most extraordinary sound application made for the iPod. It’s also a little hard to describe, because it is so new (sort of how RSS feeds and Tivo were once difficult to describe, and yet eventually became new norms of how we process information). RjDj isn’t software so much as an engine for software — numerous “scenes” have been programmed that are then played within RjDj. Those scenes allow the listener to then listen to generative and reactive music, the best of which actually process the sounds around you in real time. For all the dozens of RjDj scenes with which I’ve experimented (some free, some at a minor expense), my favorite remains one of the free ones that comes with RjDj, called Echolon. In Echolon, every sound that your mic picks up is then echoed around you — left, right, top of head, over and over, as it slowly fades in volume. The experience is exhilarating. There are weeks when almost all of my iPod use is simply playing RjDj, and much of that time is spent in Echolon. William Gibson once wrote, “The Walkman changed the way we understand cities”; well, RjDj has literally changed the way that I walk through the city — I walk toward potential sound sources, such as street musicians and construction sites, on a regular basis (and in a manner that is increasingly subconscious).

2. Bebot (version 1.5: apple.com, appspot.com): Bebot is a cute little multi-touch synth that has found use in live performance by numerous laptop-wielding musicians. In its simplicity, it bears a certain resemblance to near-phenomena, such as Leaf Trombone and Ocarina, both of which have introduced casual (casual perhaps to the point of rote) music-making to a broad audience, and is a strong suggestion that super-simple individualized instruments have a future in a music-tool marketplace increasingly defined by feature-packed apps.

3. Bloom (version 2.01: apple.com, appspot.com) and (jumping ahead alphabetically for the moment) 4. Trope (version 1.0.1: apple.com, appspot.com): Bloom and Trope are two apps developed by ambient godfather Brian Eno and his development partner Peter Chilvers. They’re generative apps that emit ambient tones based on some touch input and scene-setting decision-making on the part of the listener. They’re best thought of less as music applications unto themselves than as Brian Eno music albums released in a manner that allows for some user participation.

5. DopplerPad (version 1.6: apple.com, appspot.com): This is a somewhat complex but highly rewarding loop-based music maker that includes the ability to employ in your performances samples recorded with the iPod, and it involves excellent touch controls.

6. Gliss (version 1.0: apple.com, appspot.com): Gliss is a brand new, and very simple, gestural music-maker. It was released on December 23, and I was immediately taken by its use of drawing on the screen (in addition to the tilt function) to manipulate sound.

7. JR Hexatone (version 1.1: apple.com, appspot.com): A highly original implementation of a beat-oriented music-maker, with an interface so packed with iconographic tools and settings that it’s just dying to be ported to tablet form. (This app makes an interesting study in contrast with the two Brian Eno apps listed above. All three were developed by musicians associated with prog rock — JR Hexatone with Jordan Rudess of the band Dream Theater, whose music I have never enjoyed, but this app is engrossing.)

8. SoundGrid (version 2.0: apple.com, appspot.com): There are a lot of grid-based casual music-making tools on iTunes. It’s quite likely that I haven’t tried them all, but of the ones that I have, SoundGrid is the best — the best internal sounds, the best mix of effects, the best use of touch gestures, and the best approach to multiphonic voicing.

9. SunVox (version 1.4.5: apple.com, appspot.com): On the face of it, SunVox shouldn’t really be on this list. It’s a very complex synthesizer that doesn’t make much of the iPod’s touch interface. However, that complexity comes with purpose — SunVox is fully functional (and while I try not to take price into consideration, it’s also a quarter the price of vaguely similar offerings in the iPhone store, and that’s hard to ignore). And the utilitarian interface also has a purpose: the software’s creator is making SunVox available on numerous OSs, including Windows, Linux, Windows Mobile, and PalmOS — and thus it also deserves extra points for not treating the iTunes Music Store as a walled kingdom.

10. Touch DJ (version 1.0: apple.com, appspot.com): Touch DJ is one of many tools for the iPod that emulate the experience of working two sounds together, whether those sounds were sourced on vinyl or on CD or as digital files. What distinguishes it from the iTunes Music Store competition isn’t just that it’s fully functional (a lot of scratch apps on the iPod are little more than vinyl-emulating sound-effects generators, and a lot of the DJ apps are bare-bones implementations with little sign of intended improvement). What distinguishes it is how it uses visual cues as part of the DJing process — spikes in the sound waves of samples signal that a beat is occurring. (A close second in this DJ caterory is Sonorasaurus, which I’m looking forward to watching develop.)