Seven of the top 10 most popular posts on this site during the month of June (out of a total of 37 posts) were drawn from the site’s week-daily free (and legal) download recommendations, the Downstream department: (1) a Four Tet remix by Canadian beatsmith Caribou, (2) Kid Koala‘s take on “Moon River” (released as part of the Ninja Tune label’s 20th-anniversary festivities), (3) broken instrumental hip-hop by 22Tape, (4) Hungarian dubstep (from Banyek), (5) pianotronica, (6) hold-your-breath ambience by Kirill Platonkin, and (7) 8bit abstraction from I, Cactus. 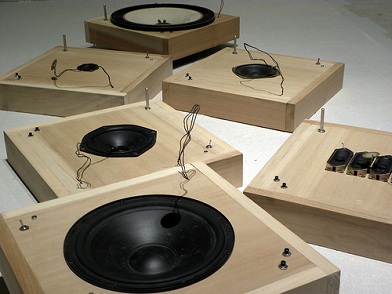 Also in the top 10, (8) my interview with sound artist and vocalist Lesley Flanigan (whose homemade instruments are pictured above), (9) a note about a neato vinyl/CD hybrid created by techno DJ Jeff Mills, and as is occasionally the case, (10) one of the automated Saturday round-ups of the previous week’s twitter.com/disquiet posts (this one including brief notes on Songbird, statistician Mark Hansen, artist Ben Rubin, artist Zhang Huan, cartoonist Pascal Matthey, the Falun Gong, similes, foghorns, and the late designer Tobias Wong, among other subjects).

The most popular two posts of both the last 60 and 90 days were an MP3 Discussion Group on Oval‘s recent album, Oh, and the recent free album download I compiled, Despite the Downturn: An Answer Album; each track on the album is a response-in-music to a misinformed article (“The Freeloaders”) about copyright and creativity in the May issue of The Atlantic by Megan McArdle.

There were a lot of ties for most-search-for terms this past month, topped by: “rss,” “soundcloud” (the music community), “autechre,” “topic,” “oval,” “oval celeste” (a reference to the art on the cover of Oval’s recent album, Oh; it’s by Céleste Boursier-Mougenot), “youtube,” “bandcamp” (another music community), “buddha machine,” “cardboard,” “mego” (the record label), “minimalism,” “oval oh,” “rephlex,” “souns,” and “static kitten” (an act whose drone release on the No Type label was featured here over a year ago: disquiet.com).