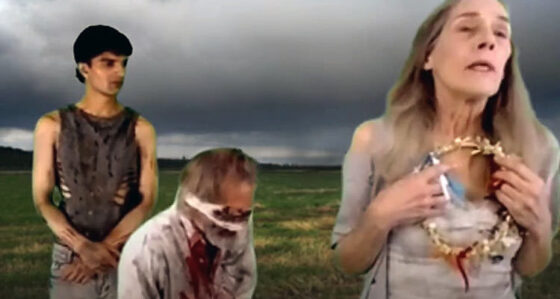 If you study insults, then “King Lear” is an endless resource. If you study sound, there’s still some solid material.

“the murmuring surge,
That on the unnumber’d idle pebbles chafes,
Cannot be heard so high.”

This moment (for sound-studies types) in Shakespeare’s “King Lear” is from when Edgar (in disguise) is tricking dear old (and horrifically blinded) dad Gloucester from jumping off a cliff.

The cliff isn’t actually there, of course. After the avoided jump, the two try to listen in the opposite direction, which is to say up. Edgar, who has convinced Gloucester that they have indeed jumped but by chance survived, reports:

“the shrill-gorged lark so far
Cannot be seen or heard”

And then King Lear shows up, as does a gentleman. The observational tables are turned when Edgar asks, “Do you hear aught, sir, of a battle toward?”

And the Gentleman replies:

“Most sure and vulgar: every one hears that,
Which can distinguish sound.”

If Shakespeare is even remotely your thing, take advantage of the rare benefit of Covid-19, which is that the San Francisco Shakespeare Festival has been presenting “King Lear” online for free, due to social distancing concerns, and that those shows are available worldwide to anyone with internet. The thing is, they’re only available live, and as of this writing, only three performances remain. They stream at youtube.com/SFShakes. The way the troupe makes use of Zoom, the platform on which they perform, is amazing. Each actor is alone is her/his/their room, against a green screen, speaking their lines live, the individuals then combined against a background image as if on stage together. I watched last Sunday, and was blown away, not just by the work, but by the ingenuity.

One more sonic observation: because all the actors are performing on their lonesome, each spoken voice appears from within its own room tone. Each voice carries with it the space in which that voice is enunciating. Each actor is subject to a different echo, a different hum. They’re all on the same virtual stage, but they’re all in very different rooms. The strange ever-shifting background sound, the way each voice has its own contours, its own dimensions, makes a perfect match for the slightly low-resolution shapes that each human form takes on screen, as their features blur into the shared virtual background. Per chance the image on the festival’s website, at sfshakes.org, is from the scene described above. That’s, from left to right, Yohana Ansari-Thomas as Edgar, Phil Lowery as Gloucester, and Jessica Powell as Lear.