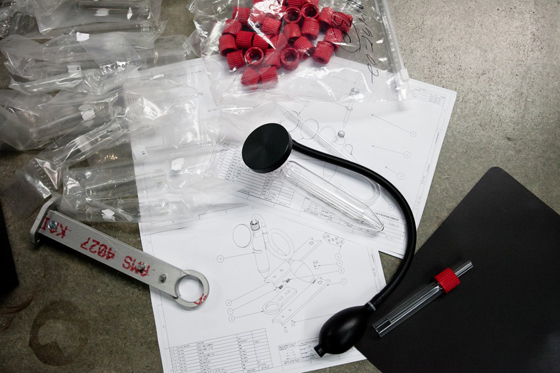 Paolo Salvagione, the Sausalito-based artist, has completed a new body of work. As with several of his other recent projects, I was invited to compose an accompanying essay. His new work, Vessels, is an exploration of smell. It is a set of containers of liquids that emit select odors. Some are organic, some synthetic, and all allow him to explore issues of memory, among other things. The work will be installed at the Headlands Center for the Arts on Sunday, April 22, from noon until 5:00pm. 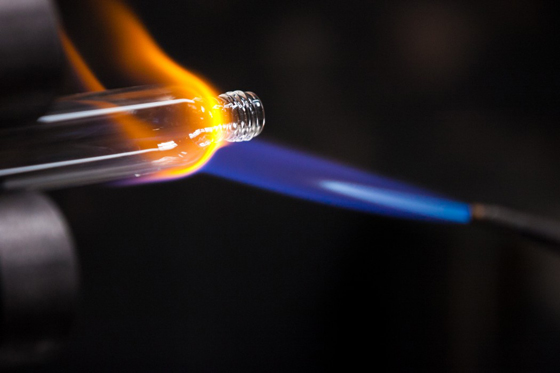 This is the essay I wrote:

The painter says that the graphic novelist damages the image by trampling it with text. The video artist says that the painter leverages nostalgia for ancient craft at the expense of modern craft. The sound artist says that the visual artist’s hegemony keeps sound registered as a second-class citizen, and then mumbles something about “apartheid,”as if floating a rhetorical test balloon. (It sinks.) The sculptor says that the visual artist and sound artist are coddled in the gallery, while sculptures weather the elements in the inevitable, and far from Edenic, “garden.”The tactile artist bemoans being stuck at the kids table. And the smell artist? No one asks the smell artist. No one notices the smell artist is in the room.

But since you ask: The smell artist prefers the graphic novelist’s earlier works because the aged paper has a dusty perfume. The smell artist can’t get close enough to the painter’s work because of those temperamental security guards — but just looking at it summons fond recollections of turpentine. The smell artist prefers sound art when it goes awry: there’s nothing like a short circuit to wake up one’s nostrils. The smell artist prefers sculpture during the weathering process: the musk of warm rain, the burn of tarmac under a hot sun, the tinge of iron ionizing in the open air, the way harsh winter air freezes nose hair. As for the tactile artist’s work, the smell artist simply remembers to wash because, reportedly, one raises one’s hand to one’s face 15.7 times per hour.

No one asks the smell artist, which is fine because the smell artist doesn’t speak much. The smell artist works in the manner of a nuclear scientist: in silence, with deliberate motion. The smell artist employs substances that, if mishandled, would fill a gallery with sensory overload, and just as quickly empty it of its patrons. Smells are reduced carefully to essential oils or their synthetic proxies. They are carefully contained in vessels: glass decanters whose hoses bring to mind medical equipment. The decanters are carefully engineered; with a simple touch they emit the requisite measure of scent. The decanters are modest sculptures, their glass essentially transparent. The aerosol they produce is so fine, down to 2.5 Ã¥ngströms, one can barely hear it as it is emerges. Some of the liquids are as clear as the glass, and thus bring into question the concept, the purpose, of hue; released as vapor, they all are almost invisible. And finally, aligned in a particular sequence, the decanters tell the story that the smell artist desires to tell. Again more on the work at salvagione.com.

These are the three previous Salvagione piece for which I have composed essays: Blackwork, Orbit, and Competitive Swinging. I will have an essay in a forthcoming publication from Extracurricular Press documenting another of his works, Element (images and details at boondesign.com). And here is a video documenting one of his exhibits, for which I provided music supervision (or as he delightfully put it, euphonic coordination): “An excuse to respond.”

The subject of scent and its orientation in regard to ambient sound came up during another recent project I participated in, related to the surrealist painter Remedios Varo. In my summary of that project, I mentioned an old essay by Brian Eno about scent that is worth a read in the context of Salvagione’s Vessels: “Scents and Sensibility.”

Photos by Andria Lo (andrialo.com), with exception of printing process, below, which is by Boon Design’s Brian Scott (twitter.com/boondesign). 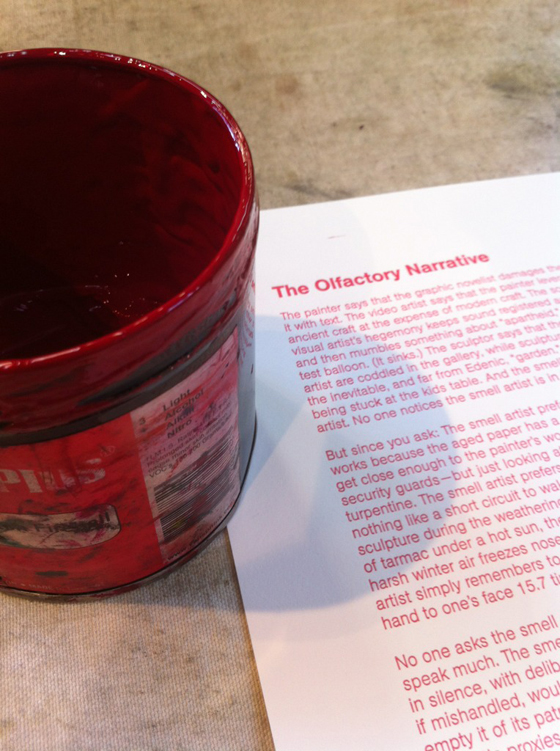 2 thoughts on “The Olfactory Narrative”