There is a new movie score out from the team of Trent Reznor and Atticus Ross: Bones and All, the “coming-of-age romantic horror road film” by director Luca Guadagnino (Call Me by Your Name, Suspiria) and screenwriter David Kajganich (The Terror, Suspiria).

Early on in Reznor’s film-score career, 20-plus years after the debut of his band, Nine Inch Nails, he made a comment about how he didn’t intend to do many scores. I need to find the reference, but he was quoted as saying something along the lines of not necessarily having enough “ideas” (I believe that was his word) to do more than maybe one a year, if that. Fortunately, his ideas have flourished, and we’ve had another 14 scores — all with Ross, who has numerous of his own, as well — since the breakthrough that was 2010’s Social Network.

Bones and All is an hour and nearly a quarter of characteristically exquisite attention to detail. The melodies are simple. The textures are rarely muddied. The motifs are persistent. And it’s all committed as if the microphones are inside the instruments. Just when you think a particular string part is getting routinized, you realize the sheer variety of nuance with which Reznor and Ross are working.

And then there is “Unfinished Business,” the 22nd of the Bones and All soundtrack album’s 24 tracks. It is hypnotic, even darkly psychedelic, with its industrial noises, plucked strings, warped vocals, and shimmering faulty-circuit feedback. And then those voices come fully into sonic view, and they are, by all appearances, lifted straight from the movie itself. Diegetic and non-diegetic — on-screen and off — converge emphatically. These are horrific sounds (it is a horror film; it is about cannibalism), all gnashing and moaning. The voices peek out of the thick noise bed like arms violently grasping for prey.

And then they disappear. At one point in “Unfinished Business” there’s a gap, a pause, a near silence, just the quiet of what I presume to be the dark of night, and then the score comes back strong. It’s a startling moment in a score that otherwise hints at rather than underlines the goings-on. I’m not a big horror-movie viewer, even though I do count George A. Romero’s Dawn of the Dead as one of my favorite movies of all time, but I’ll be watching Bones and All at some point soon for sure. 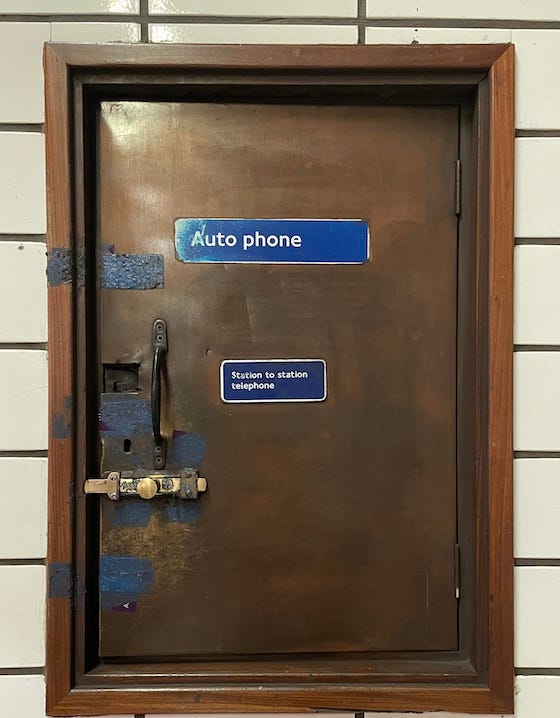 My friend Susan Blue, an American living in London, sent me this photo from a tube station she frequents. You have to love the austerity and mundanity of this enclosure, and, in the age of the cell phone, the archaic concept of hardwired communication lines reserved to connect specific locations — of course, it’s quite likely these now serve as valued, if unintentional, redundancies in the case of mobile-phone failure. Or they’re just nice spots for transportation workers to store their Tesco sandwiches. “Such is the stuff from where dreams are woven,” David Bowie sang in “Station to Station” (a 1976 song that may be about as old as this compartment). So true.

If you’re an admirer of composer Hildur Guðnadóttir, then you’ve likely listened to her phenomenal music for Tár, the new Cate Blanchett film, even if you haven’t had a chance to see it in a theater yet. You’ve also, then, sorted out that it may be her most challenging score date, from what seems like the emulation of traffic noise in “Tár – II. Allegro” to the oceanic roiling of “Mortar.” So, while getting oriented with the intensity of Tár, here’s a soothing but no less engaging flashback to 2014: a 20-minute live solo performance in which she sings and plays and loops segments through all manner of textural filters.

And some bonus news: Guðnadóttir has at least one more score due by the end of 2022, for Sarah Polley’s Women Talking.

There’s a new song out from Ryoji Ikeda, the Japanese musician and installation artist who likes to flood massive spaces with immersive minimalist visuals that resemble test patterns for imaginary technologies. When it comes to more intimate zones, such as the space between our ears, he can really edge into the blissfully frantic. This new track, “ultratronics 01,” is everything I love about Ikeda’s music compacted into a strident, glitchy five minutes that sounds as if a dying alien civilization of anxious androids only knew about the idea of music from stray Earth signals carrying Dizzee Rascal and Cliff Martinez albums to their distant, fading star. The constant fritter of vocal cut-ups finds common ground between telecom packet switching and a spin of the FM radio dial, while the underlying rhythms suggest that someone with a PhD in 20th-century percussion music decided to make an EDM record. If data poisoning is your drug of choice, this is for you. The full album, Ultratronics, comes out on the Noton record label, run by Alva Noto (aka Carsten Nicolai), on December 2. 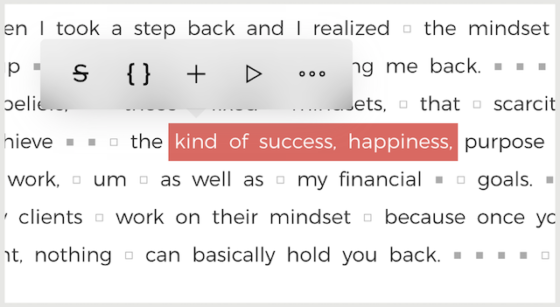 Trebble is the name of a nifty web audio app that lets you not just edit but augment recordings in your browser. It works best in Chrome. You upload spoken text, which is automatically transcribed (and, yes, is prone to error — and yes, we’re being trained by our speech-to-text tools to enunciate with greater precision, and yes, I do find new reasons to rewatch Francis Ford Coppola’s The Conversation pretty much every day in our ever more increasingly technologically mediated world). You can then — magically, as it were — edit the audio by editing the text. That is: If you want to remove a clause from the audio, you either cut it or instruct Trebble to ignore it. You can also remove noise and — this is pretty cool — add music to select moments within the track. And when you’re satisfied with the result, you can output the recording for subsequent use, with all the edits and other augmentations in place. Trebble is clearly still in beta. The interface reminds me a bit of what you can do in rev.com’s transcription service, but the editing and enhancement is something else entirely. It’s still early going for Trebble, but the user experience provides an upstream view of what’s ahead. Tools like this quite quickly go from web novelties to universal norms. (Found via the always excellent webaudioweekly.com.)

Try it out at trebble.fm