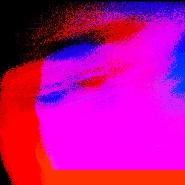 Eight of the top 10 most-read posts during February were what amounts to a globe-spanning list of Downstream entries — that is, of legal freely downloadable recommended listening. These included (1) a Japanese turntablism blowout, (2) Bulgarian-tinged British instrumental hip-hop, (3) truly minimal techno from Switzerland, (4) field recordings made at the South Pole, (5) Brazilian electronic music circa 1970, (6) the Gristleism a la Herbie Hancock in Russia (the cover of which is pictured above), (7) tessellations of bass loops in Nottingham, and (8) ambient-leaning post-rock (or vice versa) from Portland, Oregon.

Also making the top 10, (9) a summary of recent news, including mentions of Michael Gordon‘s return to Miami, Douglas Gordon‘s “24 Hour Psycho” (as referenced in Don DeLillo‘s recent novel, Point Omega), and a display of album covers by Josef Albers, and (10) some thoughts on iPad software bloat. In all, there were 35 posts in February on Disquiet.com.

The most popular post of the last 60 days was an MP3 of sound art produced from recordings made at an Indian call center.

The most popular post of the last 90 days was an overview of the, in my opinion, 10 best iPhone/iPod Touch music/sound apps of 2009.

The most popular post of the last year was a streaming playlist of electronica built by various artists, all made from field recordings.

The 10 most searched-for terms on Disquiet.com during the month of February were, in declining order of popularity, with some ties in there: “brian” (as in Eno), “topic,” “laptop,” “commercial,” “fm,” “ito,” “buddha machine,” “pleasing,” “unyo” (an artist on the Hexawe netlabel), and “wilkerson” (as in Phillip) — and for what it’s worth, number 11 was “Autechre,” who have a new album out, Oversteps (Warp).