Just how little action can one take and still be considered a performer? If yesterday’s featured video nudged at the inherent idea of a “live” performance by showing generative software mid-process (no human required), then today’s video re-introduces human physical interaction but in a very simple way.

The video, titled “Yellow Pages Tone Cluster,” begins with a humorous touch worthy of John Cage: A few seconds in, the artist Peter Speer places a massive phone book, its front cover ripped off, atop an electric keyboard, and thus sets in motion a broad, dense uber-chord that plays for nearly 11 minutes straight.

“Motion” may not be the right word. What the phone book creates on the keyboard is a multi-octave held chord, quite the opposite of motion. That chord changes only due to the ear’s sensitivity to overtones and waveforms, and Speer’s subsequent small changes. He alters the chord as it proceeds. Specifics aren’t laid out at the video link (the only text is “The lost art of playing a keyboard with a book”), but as it goes the organ tone takes on beading and phase-shifting, glitch wonderment and reduction to a sheer shimmer. And at then end Speer removes the phone book. The ceremonial bow is implied.

One side note: This video is a good example of how the very thing that can make computer music a tough sell in a concert setting works exceptionally well on streaming services like YouTube and Vimeo, where the audience has such GoPro-style proximity (“goproximity”?) to the sort of small gestures that are lost with a live audience. The only way something like this would register in front of a group of people is if there were an effort made to include a properly framed live video projection during the performance — of course, while the scale would make the performer’s movements legible in concert, it would also potentially overstate their gravitas. (I should mention, I’ve seen plenty of shows where this sort of projection occurs but it’s usually for more flamboyant playing styles and often isn’t framed particularly well.)

Unfortunately I can’t add this to my “Ambient Performances” playlist because the playlist is on YouTube and this video is on vimeo.com. More from Peter Speer, who’s based in Chicago, Illinois, at diode-ring.com. Video found in a discussion about minimal physical mixing consoles at llllllll.co.

There was word out that a new Autechre track was due for broadcast at some point today. It has occurred, and the appearance of the 12-minute stretch of off-kilter beats and broken static has made its way to YouTube on several channels. How long it’ll remain online is unclear. The track is titled “feed1” according to the DJ at the start of the extracted segment, which played this evening, London time, on BBC Radio 6. It’s a perhaps uncharacteristically repetitive piece for the duo. The beat itself is difficult to nod your head to, certainly, but the overall effect is of dedicated, near-industrial perseverance. The tricky, arhythmic metrics themselves cycle on fairly steady repeat, in other words whatever chaos/4 maps to on a drum machine.

The video’s reveal comes 33 seconds in. Up until that point the camera has been slowly gazing around traditional Kyoto, Japan: the vaulted roofs, the red gateways, the concrete structures, the sculptured foliage, the constructed waterways. The wide-angle, perfect geometry of the shots, and the slow motion in which they appear, at first have the feel of a video-game cutscene, but for all the perfection, this is real. This is Kyoto, in all its preserved beauty. The stroll is accompanied by a beat, the heady semi-swagger of solid instrumental hip-hop, the way instrumental hip-hop can be tinged with nostalgia. The nostalgia of instrumental hip-hop may often be for the very early 1990s, and the nostalgia of Kyoto may be for several centuries earlier, but they pair well. Hip-hop and Japan have a longstanding relationship, a sense of mutual regard, so the matchup makes sense. And then at 33 seconds, into view comes British producer Ally Mobbs, propped up on the edge of low wall, pounding gently if insistently on an MPC 500, the portable beat machine, his head bobbing. He’s as lost in the music as we are. The difference is, he’s making the music. We get barely five seconds before he disappears from view, the camera wandering back on its own way. At 51 seconds he appears again, and remains in view, until the very end (the video is 1:34 long, but the music is over at about 1:28). There is no sound besides the music, no footsteps or birds. The headspace of the music is the headspace of Mobbs himself, who’s performing the track — recording the track — live while the camera is filming.

The video was posted two days ago on the YouTube channel of Nedavine (nedavine.bandcamp.com, nedavine.com). More from Ally Mobbs, who lives in Kyoto, at allymobbs.com, allymobbs.bandcamp.com, and twitter.com/allymobbs. Track found via a post Mobbs made on the llllllll.co discussion boards.

Update (April 3, 2016): The SoundCloud account of half of the Monome duo mentioned below, Kelli Cain, today uploaded a higher-quality recording of the same concert:

The developers of the Monome have shepherded not just a series of refined devices, including their namesake grid and a growing number of synthesizer modules, but a community that makes music with them and software for them.

That Monome community largely gathers at llllllll.co, a discussion site, but occasionally there are opportunities to meet up in person. About a month back, on February 19, Monome’s Kelli Cain and Brian Crabtree, who are based in upstate New York, performed as a duo at a tiny shop in San Francisco’s Outer Richmond neighborhood. The audio for that set is now available as a free download from shop’s SoundCloud account (soundcloud.com/betterforliving).

I was at the show, and can confirm the audio captures the songs well. It’s a series of gentle, folktronic pieces, each with a trance-like quality. Certainly there in the mix are the soft looping synthesizer sounds often associated with the Monome, but there’s also a sweet vocal thread, the pair harmonizing like adjunct members of Low or of Iron and Wine. The acoustic shaker heard early on in this half-hour set is one of several that come out of Cain’s work in ceramics (see: kellicain.com).

At the show Crabtree had several of the shakers on the table. He’d shake one for awhile, and then pass it to someone in the audience to continue the pattern. Each person became an extension of what Crabtree had started, but then altered it a little, whether through the conscious decision to contribute a musical idea, or simply because their sense of rhythm differed from his. Either way, the passing around of the shakers was a masterful example of the real (that is, physical) world reflecting something intrinsic to electronic culture (looping), all occurring in the context of a makeshift community (in this case the few dozen attendees).

Here are two shots I took at the time and that I posted the day after the show at llllllll.co: 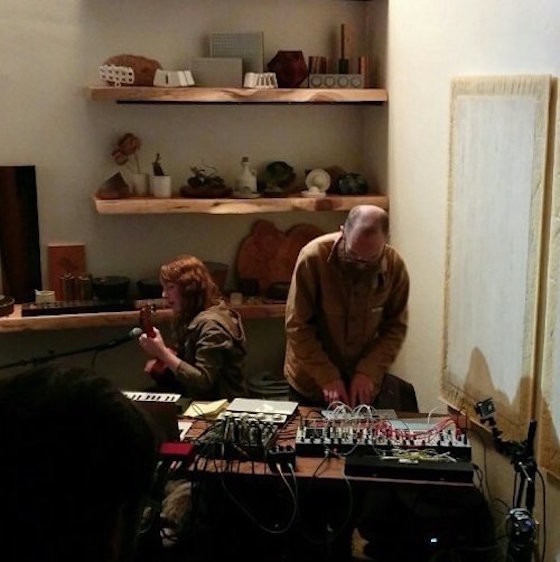 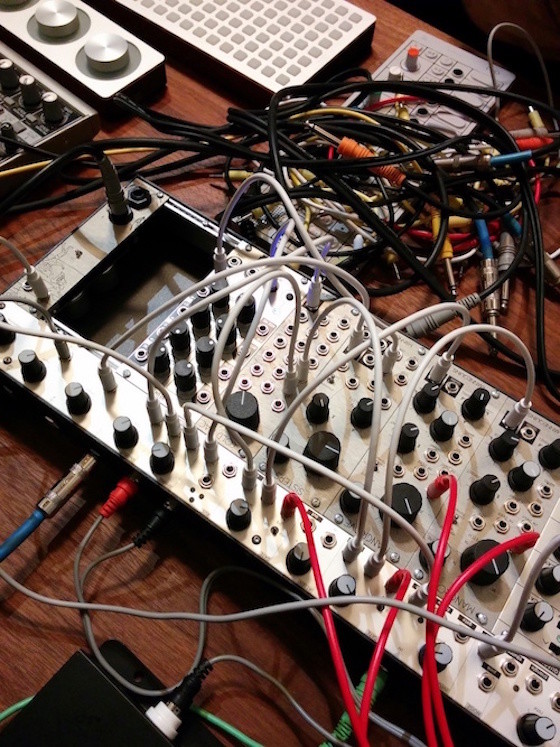 Track originally posted at soundcloud.com/betterforliving. More on the Monome, Cain, and Crabtree at monome.org.

There is a kind of music that can be thought of as perfect. That’s not a qualitative statement of taste so much as an attribution that recognizes how fierce dedication to an elegant scope can yield something singular, effecting, evocative. The term applies, certainly, to a series of live improvisations for digitally mediated electric guitar recently posted by Valid Lover, who’s based in Brussels, Belgium. The music is deeply spare, consisting of brief, tentative moments, not so much riffs as instances when fingers hit strings, moments smaller still, within a cycle of a vibration. Those riffs trigger digital refractions, echoes, and splinters, high-pitched sounds that linger in the air like sulfur, quavering pulses that your ear keeps listening for long after they’ve passed.

The track “Sketch 16″ — they’re all “sketches” in the titling — is a great entry point to what serves as two full albums of examples, (Air ( and the divisions between ) and Weight ( with those held beneath ), both available from his validlover.bandcamp.com page for free streaming or a small download expense (â‚¬5). At times the derivations from guitar are so precise that they bring to mind the artificial strings employed by Oval (Markus Popp) on his 2010 album, O, but the majority have a casual quality that draws on the unique characteristics of live performance.

Track originally posted at validlover.bandcamp.com as part of the album Air ( and the divisions between ). Found via a discussion at the llllllll.co message boards.