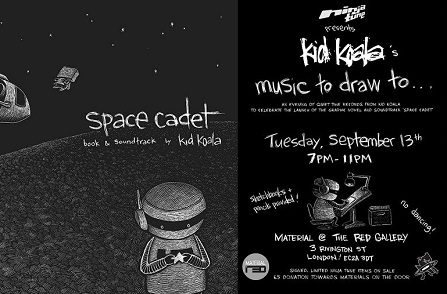 Following up a recent interview with Kid Koala about the intersection of scratchboard comics and turntablism scratching, here’s another audio interview with the Canadian musician and longtime Ninja Tune Records roster member on the occasion of his new graphic novel and accompanying soundtrack, Space Cadet (MP3). He was interviewed for the excellent Panel Borders comics podcast series, part of the generous offerings of resonancefm.com. Koala is a thoughtful participant in and observer of the more sedate vestiges of street culture. He spins a good tale about the origins of his “Music to Draw to” series, in which he DJs downtempo music to inspire the artists and other creative types who show up for the special live shows, held in places like art galleries. The series began during a Canadian winter, as a way to inspire his friends to get out of their apartments and do something creative together — or at least side by side. It isn’t just for artists. He reports that fashion designers, video-game coders, and writers have joined in. At least once, someone brought along a loom. The first rule of “Music to Draw to” is: be prepared to do something creative. The second rule of “Music to Draw to” is: no dancing.

Kid Koala on Scratchboard and Scratching

Kid Koala is one of the mainstays of the Ninja Tune label, his expressly nostalgic and maudlin approach to turntablism fitting comfortably between texture-oriented art music and mood-setting party music. His latest release, Space Cadet, is a follow-up to an earlier such venture, Nufonia Must Fall: it’s a graphic novel with a score. He recently discussed the overlap between his comics and turntablism — between the scratchboard on which he made the drawings, and the scratching that is the foundation of his music — as part of a wide-ranging, and highly recommended, interview on the record label’s podcast. It’s downloadable as an M4A file — essentially an MP3 with embedded images, and a slightly more finicky nature in regard to playback.

Among the influences on his work discussed during the podcast interview is Carter Burwell, best known for his scores for Coen Brothers movies. Koala talks about the difference between scoring a movie and scoring a book, noting that while the music is intended to be listened to while one reads the graphic novel, he’s not particularly dictatorial about the speed at which the book is read, or how specific instances in the score are intended to align with instants in the narrative.

He’s touring in support of the album. The evenings are something he’s described as a “seated headphone concert,” in which the audience settles into “space pods” and listens to the music on devices that allow them to adjust the volume. Interestingly, Amon Tobin, arguably the other main artist on the Ninja tune roster, is also doing a multimedia tour right now, though Tobin’s audio-visual effort, titled Isam, is far more technologically demanding than Koala’s (it’s described at amontobin.com as a “25′ x 14′ x 8′ multi-dimensional/ shape shifting 3-D art installation … enveloping him and the audience”).

Video originally posted at youtube.com. More on the release at kidkoala.com and ninjatune.net.

Turntablism Before and After Hip-Hop (MP3)

But, of course, the creative employment of the turntable as not just an audio-playback system but also as a means of artistic production, as a performance instrument, is a long tradition. John Cage’s “Imaginary Landscape No. 1” included turntables in 1939, which means just as long prior to the birth of hip-hop as we now are far from it. Hip-hop by and large has left the turntable behind in favor of digital samples, but avant-garde use of the turntable continues apace. 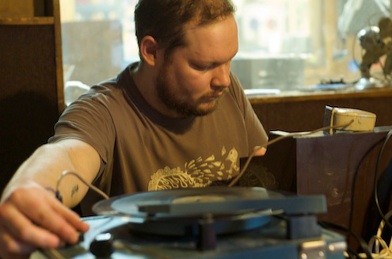 Take the work of Jay Sullivan, as recently displayed in a live performance broadcast as part of the Rare Frequency radio show, on WZBC 90.3, and later disseminated more widely as a podcast MP3.

The piece begins with the texture of the turntable, the slow warble and mechanical cadence of its rotation, the surface static noise. The introduction of a bellows sound, likely a harmonium (the credits on the site are minimal), serves several compositional purposes. It provides a drone that suggests an affinity for the underlying currents of Indian music. It shifts the opening texture from foreground to background. It suggests the turntable texture as the most minimal of rhythms, to be contrasted with the most minimal of melodies that is a drone. But most importantly, it simulates that distinction between foreground and background: The airy breath of the bellows, like a harmonica or organ on some surreally attenuated sustain, hovers above the texture of the turntable. The turntable surface doesn’t adversely affect the sound, as would be the case if the bellows noise were in fact recorded on the vinyl we hear. Instead, a cavern opens, and we listen to that void as much as we do to what is on either side of it.

A Turntable and a Koto Record (MP3s) 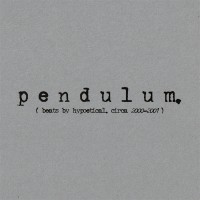 With its echoes of Wagon Christ and Funki Porcini and DJ Krush and Kid Koala, Pendulum by San Jose, California-based Hypoetical builds old-school hip-hop beats from hazy fragments of melodramatic found sounds — an association Hypoetical engages with directly by titling the album’s 21st and final track, a three-minute rhapsody for thumping beat and a handful of piano notes, “Elevator Music” (MP3). Reissued recently online for free download by the great dustedwax.org netlabel, the album dates from 2001. Its best tracks, like “Elevator Music,” keep their source material relatively unmolested. “A Turntable and a Koto Record” (MP3) sounds like pretty much exactly that, though the koto’s strings are heard to make curt, terse repetitions, much like those in “Elevator Music,” that the instrument never would in its traditional setting. Likewise the murkily orchestral “The War Within” (MP3), which makes much of a briefly bowed cello. Other favorites include the eerie children’s melody of “Staring at My Eyelids” (MP3), the romantic whorl that is “Reminds Me of Dennis” (MP3), and the overtly cinematic “Flow Job” (MP3).

Get the full set of 21 tracks at dustedwax.org. If this weren’t already a decade old, much of it would be on my “likely” list for best netlabel releases of 2011. More on Hypoetical at hypoetical.net.

It’s been over 50 years since the BBC saw fit to create its own applied laboratory for electronic audio — which at the time meant, to a great extent, the creative use of tape recordings and turntables. That lab was known as the BBC Radiophonic Workshop, and it existed from 1958 through 1998, during which time it benefited from the efforts of such early electronic music figures as Delia Derbyshire and Daphne Oram, and produced untold hours of sounds and music (the distinction between which was a source of near-constant inter-departmental drama) for BBC radio and television, including, perhaps most famously, the theme song (aka “signature tune”) for Doctor Who. 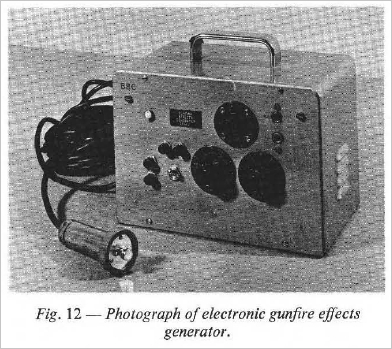 Sonic Warfare: A gadget created early in the life of the BBC Radiophonic Workshop: “weighs only 12 lb.”

In the process of reviewing a recent book on the Workshop — Special Sound (Oxford), by Louis Niebur — for another publication (that review should be out in January), I was introduced by a friend to an online trove of BBC engineering monographs, some of which include Radiophonic-specific documentation. There’s one in particular, from 1963, that’s entirely about the Radiophonic activities. And it’s the subject of my latest post at boingboing,net, “BBC Engineering Monographs from 1950s and ’60s: Once 5 Shillings, Now Free.”