Two of the 10 most popular posts on this site during the month of may relate to Despite the Downturn: An Answer Album (cover shown at left), the recent free album download I compiled. Each track on the album is a response-in-music to a misinformed article (“The Freeloaders”) about copyright and creativity in the May issue of The Atlantic by Megan McArdle. There is (1) the album itself and (2) the announcement of a 10th, additional track to the set, as well as news of coverage.

The majority of the most popular posts this past month were drawn from the site’s week-daily free (and legal) download recommendations, the Downstream department: (3) a Grassy Knoll demo circa 1998, (4) one minute of instrumental hip-hop bliss, (5) a sample track off the Oval album O (due out later this year, to follow up the album Oh), (6) a slice of Bruce Kaphan pedal-steel atmospherics, (7) a sample of the collaboration by experimental electronic duo Matmos and percussion quartet So Percussion (plus guests), (8) electronica lullabies from Athens-based Naono (that’s Greece, not Georgia), and (9) news (and free WAV files) of a Peter Gabriel / “Games without Frontiers” remix contest.

And, finally, (10) a brief bit on the return of the patch cord, which is cementing its role as a visual metaphor in software-based instruments — such as this screenshot from the iPhone/Touch app Circuit Synth by Michael Daines: 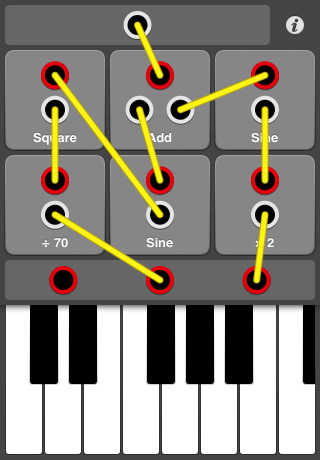 The top 9 search terms on this site for the month of May were: “rss,” “performances,” “oval” (as in Oval, see above), “drone,” “oversteps” (as in the album by Autechre), “autechre” (as in the duo that just released Oversteps), “loops,” “topic,” and “mcardle” (as in Atlantic writer and editor Megan McArdle, as noted above). Tenth place had so many words tied, it’s just silly to list them all.