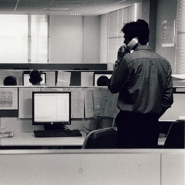 The top 10 most-read posts of January (out of 42 posts in all) were heavy with Downstream entries — that is, with legal freely downloadable recommended listening: (1) sound art made at an Indian call center (pictured at left) by Mathias Delplanque, (2) Lesley Flanigan‘s music for speakers and voice, (3) the sound of mangled cassette players (by David Kirby), (4) Tim Prebble‘s “What a Picture Sounds Like” project (in which a shared photographic image is used as inspiration for musicians), (5) old-school ambient music from Phillip Wilkerson, (6) guitar processed by RjDj (the great iPhone/Touch realtime reactive music app), and (7) Gil SansÃ³n‘s abstractions built from samples of contemporary classical music.

Also making the top 10: (8) a news report that included information on why Brian Eno likely won’t be nominated for an Oscar this year (for his work on director Peter Jackson‘s The Lovely Bones), the forthcoming new Autechre album, and Nortec Collective‘s symphonic aspirations; (9) a “Quote of the Week” by sound artist Andrea Polli describing where art and science do not overlap; and (10) thoughts on issues in “interface lag” (or iteration lag) in the ongoing development of casual music-making apps.

The most popular post of the last 60 days was an overview of the, in my opinion, 10 best iPhone/iPod Touch Music/Sound Apps of 2009.

The most popular post of the last 90 days was of field recordings made at a church in Rye, England.

The most popular post of the last year is a streaming playlist of guitar-based electronica. 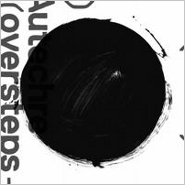 The 10 most searched-for terms during the month of January were, in declining order of popularity, with some ties in there, “brian” (as in Brian Eno), “commercial,” “performances,” “eno” (yeah, the other half), “mention” (I have no idea what that’s about), “autechre” (whose new record, titled Oversteps, is pictured at left), “banks violette,” “broad,” “drone,” and the especially peculiar “info wedding.” (Right after those 10 came “basinksi,” as in William Basinski, “bush of ghosts,” as in the compilation Our Lives in the Bush of Ghosts and the Brian Eno / David Byrne album My Life in the Bush of Ghosts, and “cicada,” as in the insect that is often used as a point of comparison for electronic background noise.)