Demos of apps by musicians are a great way to explore both their unintended consequences and their inherent strictures. In contrast with promotional videos, which generally show the app used by someone with advanced knowledge of its inner workings, initial demos by new adapters have a more hands-on feel, with the general sense of someone coming to grips with adapting something to their own musical style and performance workflow. What follows is one of Dean Terry’s demo runs through the iSEM app, which as its name suggests is an iOS adaptation of the 1974 Oberheim SEM synthesizer. He’s an especially good reference point. Not only is he familiar with the original, he has two of them in his studio.

Here are his notes on the piece, which has a steady, downtempo, stepwise flavor:

Quick test of the iSEM iOS app. This is a first patch with some live parameter noodling, driven by the built in arpeggiator. Single take, one track.

I have two actual SEMs in the studio. I think comparing is missing the point so I made something that took advantage of what this iOS app does best, which is modulation and polyphony. The best part is the 8 voice programmer which allows you to modify the sound for each of of 8 steps, which you can hear clearly in this test recording (except I’m only using 5 steps).

Recording notes: This is not exactly what the app sounds like raw. It was recorded via the ipad analog outs into outboard studio preamps, eqs, and a stereo compressor. It was then sent through a few mix bus eq’s and compressors in Protools. This is how I treat all iPad apps and other digital sources and it helps make them more vibrant and analog-like.

Two promotional videos for the app:

Track originally posted for free download at soundcloud.com/therefore. More from Dean Terry at deanterry.com. More on the iSEM app at itunes.apple.com and arturia.com.

Described by the musician as “noodling,” what it is is the sound of an iPad in the service of sonic exploration, from ominous footsteps through pulsating synthesis to dispersed beats. It was apparently recorded on a trio of apps: the multitrack tool Auria, the synthesizer Alchemy, and one named Sequence. Here’s to more noodling.

Track originally posted for free download at soundcloud.com/noimspartacus. It is by noimspartacus, who is from Birmingham, Great Britain, more from whom at noimspartacus.wordpress.com.

Plus the next Cascella/Voegelin podcast, cypher music, more

“You guys ready?”says Burtt, then waits for the echoes to die. He fires the gun, with a pop and a spark.

The pistol gives off a “full frequency event”— that is, the sound covers the full range of audible frequencies, giving a complete impulse response. Back at Skywalker, the editors will use Altiverb to digitally remove the sound of the shot.

“Then we can run whatever sound we want through that program, and it’ll sound like we’re in here,”says Langfelder.

Each microphone they have, called mid-side mics, houses two units — a front facing element to capture the event, and a figure-eight shaped one that records stereo. Because the sounds reaching the side mic have bounced off the surroundings, they helps give a sense of ambient space, says Burtt. Together, they allow the sound engineers to adjust the width of the sound, making it project a sense of space. The microphones Skywalker brought all cost around $2,000 each, and, paired with $4,500, 24-bit recorders, capture sound at 192 kilohertz, around five to six times the quality of a CD.

The article is peculiar in the absence of a mention of Benny’s father, legendary sound designer Ben Burtt, but it does a great job of walking through the process of sourcing sounds, especially for something as expansive as recording the sonic essence of a particular place. Three sound examples are embedded in the article (wired.com).

Source Material: Judging by a photo used to promote the second, forthcoming episode (July 25) in Daniela Cascella and Salomé Voegelin‘s “voyages into listening and writing” podcast, Ora, it will include writings by HP Lovecraft and Pauline Oliveros, and music from the trio of Taku Sugimoto, Burkhard Stangl, and Christof Kurzmann, among other topics: 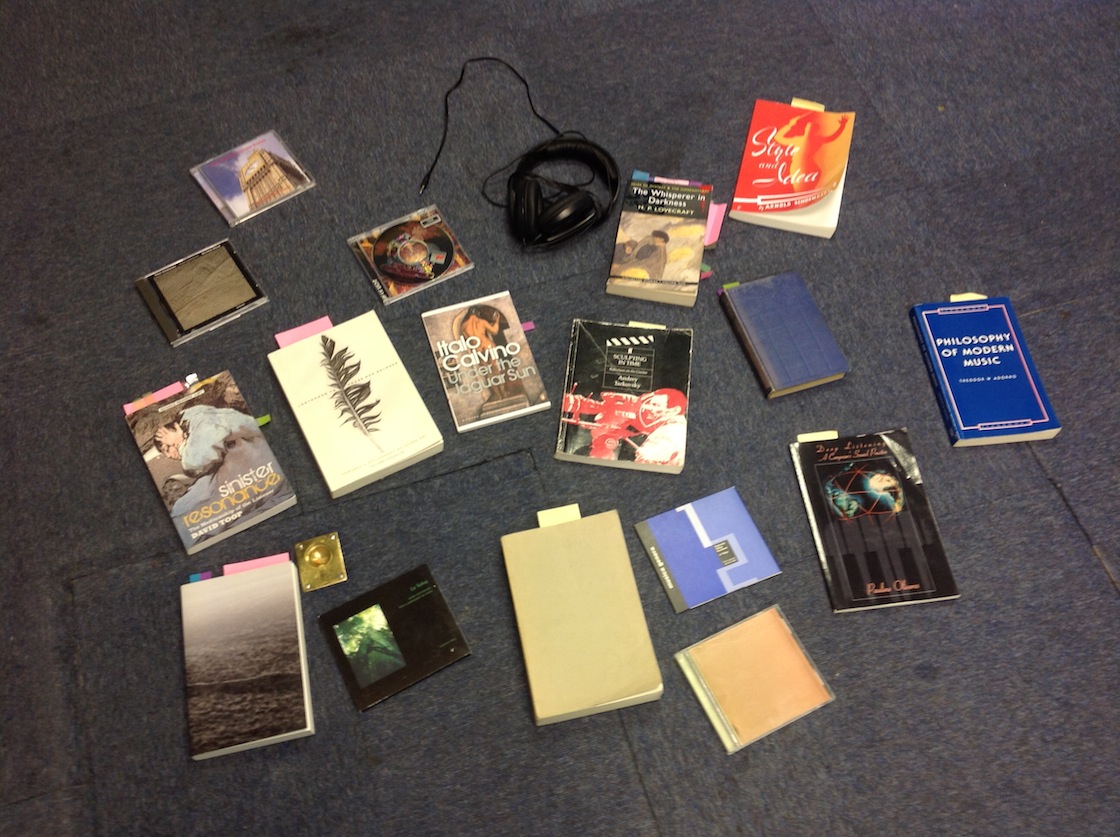 Persistent Memory: The iOS app Heard (apple.com) records continuously into a buffer, allowing you to retroactively determine you want to preserve something (image and information via addictivetips.com).

Data Floodlights: Footage of Ryoji Ikeda’s masterful “test pattern [nÂº5],” which was on display from June 8 through July 1 of this year at Carriageworks carriageworks.com.au in Sydney, Australia:

Flickr-tronica: The photo below of Brian Eno introduced me to the Flickr stream of Oz Villanueva, who is a prolific professional photographer of, among other things, live performances. Amid his massive trove are great shots of Markus Popp (aka Oval), Lisa Gerrard, Alva Noto, and Deadbeat 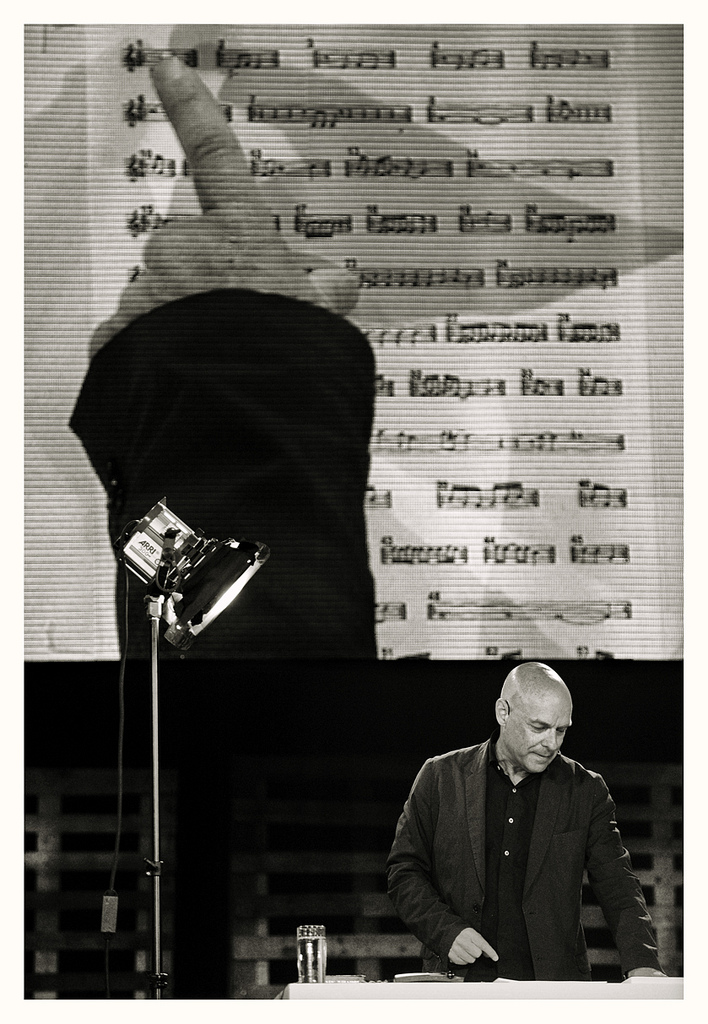 Code Blog: Diary of a coding intern at bandcamp: bandcampintern.wordpress.com

Listening at MoMA: The webpage for the forthcoming Soundings: A Contemporary Score exhibit has gone live: moma.org; it runs from August 10 through November 3, 2013.

From apps to guitar gear to distribution platforms

The recent San Francisco MusicTech Summit held, on May 28, a panel on “The Future of Music Creation Tools,” featuring Daniel Walton of app developer Retronyms, Sam Valenti of the Ghostly label and new Drip.FM platform, sound designer Dot Bustelo, and musician Dweezil Zappa. The panel was moderated by Billboard magazine writer David Downs. The panelists come at it from various, complementary directions, from iOS apps to guitar gear to distribution platforms, and there’s a heavy emphasis on practical applications, which in this heady field can be usefully grounding. 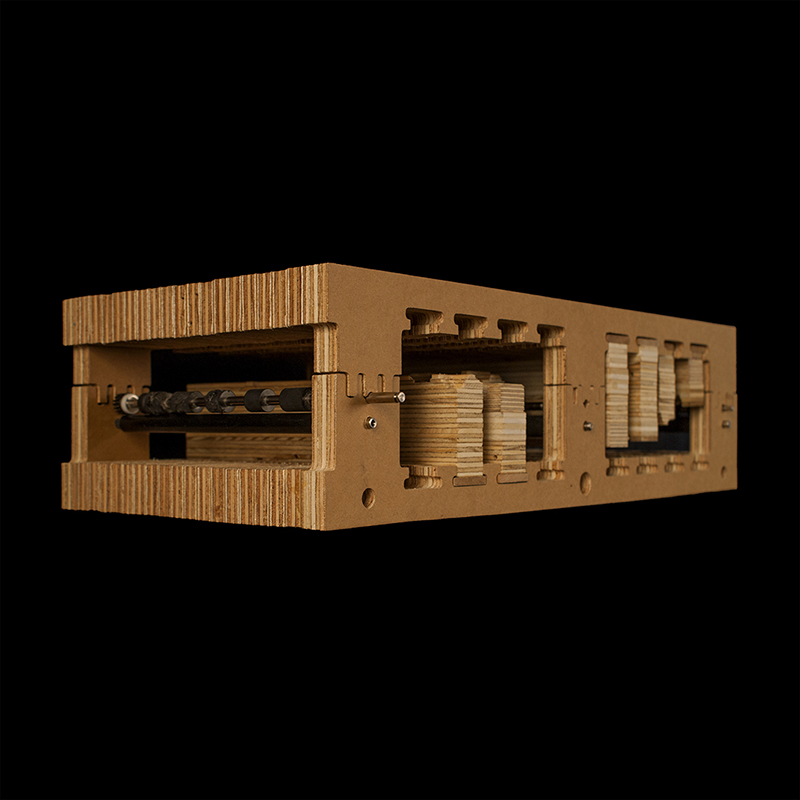